She was a write in…VP of the World: Sallie Krawcheck. 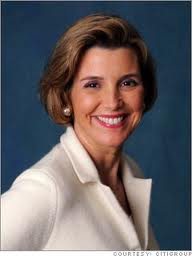 Sallie Krawcheck, New York, New York – former top-executive of the largest power wealth management firms in the world. She advises money-making decisions for billions of dollars a day, sometimes trillions, turning markets with her comments, helping our global financial markets work, to the best of its ability, it’s a continuous improvement thing. She listens, she gets it, She is Wall Street – she is every street in the United States and most other countries. I’m proud of her for turning her focus towards her family (and UNC Tarheels.) If she wanted to run for Vice-President with Catherine Austin Fitts as President, done, economic problem solved. I’d follow her, as an employee, to the moon and back (as I did from Citigroup to Merrill Lynch.) She’s one of the few economic “street smart” executives that care and understands the “do right rule.” She’s tough, authentic and a communicator, a wife and mother making global decision with as much information possible effecting everyone on earth, sound stressful, you don’t know the half of it…nearly every (every smart board of directors) want Sallie on board, or to run the company. Sallie Krawcheck for Vice-President – soon enough. It’s a Stupid voting Tuesday Thing.