Sometimes we mistake asking for help as a weakness, but it takes great strength to know that we cannot overcome our battles alone.

Whether you choose to call your higher power “God,” “Jesus,” “Buddah,” “the universe,” or “the Light” – it’s important for anyone on a spiritual path to establish a relationship with the Creator, and find ways to strengthen that bond each day.

“The Story of Blind Men & an Elephant” 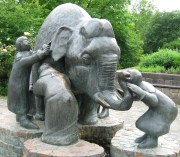 The Zen Master then looked at the crowd of town folk and exclaimed, “We are all like the blind men, we have never seen a God, so we can only describe what we feel.”

One thought on “Asking for help.”