Insanity is doing the same thing over and over, and expecting a different result. By this definition, much of “invested” America is absolutely insane.

Wall Street is a Wolf. The people working for them are wearing sheep’s clothing…because each and every employee knows exactly what’s really going on, and they choose to look the other way out of fear and greed that they will lose their job, maybe more.

Investors keep coming back, again and again. The behemoths’ of Wall Street have lied, stolen and cheated, and then admitted it, paid fines and do it again and again…and what do investors do…give them more money.

24/7 Wall Street reported in May, that of all the companies in the world, the weakest reputations fall in the financial services arena, moreover Wall Street, America. This year (2014) Bank of America, Goldman Sachs, AIG and JP Morgan Chase topped the list of most visible companies with the worst reputation. If it looks like a wolf and howls like a wolf, it’s a wolf.

During the financial crisis, each of these companies took money from the federal government, as part of the effort to stabilize the economy.

Since the crisis of 2008, we have seen a higher degree of worry and stress from financial concerns. We have experienced forced career changes, relationship struggles and greater exposure to turmoil in the world.

We have all heard about this and experienced it, at some level, but most of us have continued on, without making positive changes in our daily lives. How we invest and who we invest with makes a big difference in the world. 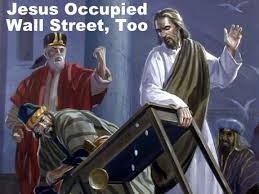 Jesus said, “Be aware of false prophets who come disguised as harmless sheep, but are really wolves that will tear you to shreds. You will know them by the way they act. The way to identify a person is by the fruit produced.” There is no good fruit coming from Wall Street and I do not support what they represent. I vote to burn the bad trees, they will never produce good fruit.